What is the Best Day of the Week to Visit Each Walt Disney World Park?

Looking to escape the cold and enjoy some Florida sun and fun at Disney? Let's take a look at which days you should visit each park:

The numbers listed on each chart below are the combined average wait times from 10AM-5PM of major attractions in the park from November 1 - December 31, 2022, except for Magic Kingdom (explained below). 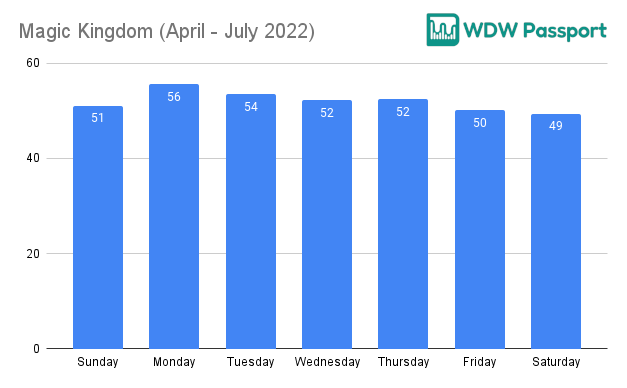 In the last half of 2022, Magic Kingdom welcomed back its Halloween & Christmas parties. This makes data from that time wildly inaccurate to use now that party season is over as there are major crowd swings between party and non-party days. For Magic Kingdom I've pulled data from last spring & summer. Crowds have been pretty consistent over the last year, so I doubt much has changed.

I'll re-do Magic Kingdom's data after the end of January.

Epcot sees its longest wait times on Monday, with crowds steady through the rest of the week picking up towards Thursday & Friday. Keep in mind that on weekends many are there to enjoy whatever festival is going on at the moment and aren't riding on full stomachs.

Hollywood Studios sees steady crowds throughout the week, with the highest averages on Monday & Tuesday.

Animal Kingdom has a similar pattern with steady crowds and Monday & Tuesday peaks.